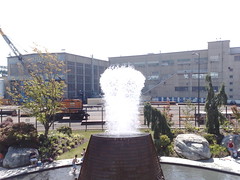 Last year, I purchased an MP3 locker from MP3Tunes, thinking it might be nice to have my music in the cloud. It’s a nice idea, but it’s not something that ends up being practical for me. It’s not easy for me to get my stuff from MP3Tunes to the device where I really want it–on my Nokia mobile phones. It ended up being a non-starter for me.

Flickr, on the other hand, is a kind of locker, but it’s for photos. It’s been around a bit longer and has a bit more of a user base. Furthermore, it’s more connected to other services and devices. For example, Flickr is a default upload destination on the Nokia Nseries devices for photos.

Now I don’t particularly need online storage of my images on Flickr. I’ve got places to put photos all over. However, the convenience of being able to upload them straight from my phone and use those photos any number of ways is very tempting.

I think what is pushing me over the edge on paying for a Flickr Pro account is the integration I now have with WordPress. Now I can take things from my Flickr stream and import them into my blog posts. That’s not strictly a Pro feature, but I figure if I’m going to rely on Yahoo to store and serve up my photos on my website, then maybe I should pay them for the privilege?

Anyway, I’m still thinking. I know $24.95 a year isn’t a whole lot in the grand scheme of things. What do you all think?