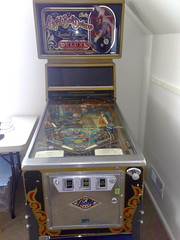 A few years ago, my wife and I bought an Eight Ball Deluxe Limited Edition pinball machine several years ago, shown here. (There’s just something about an electronic game that has a very physical element to it. It’s something today’s kids don’t entirely understand, given how rare pinball machines are these days. There used to be several manufacturers, but now Stern is the only company left making these things.

Here’s the thing about pinball machines: they’re like old cars. They are persnickety, can take a long time to get working when they break, and have parts that aren’t easy to get. And, it’s hard to find someone that will fix them, too, unless you want to dig in and do it yourself.

Opening the machine up is a bit like taking a trip back in time. The electronics inside were, of course, state of the art for the early 1980s. There is a lot of wires going every which way. The electronics are not tightly packed together like they would be today. There are several different boards for sound, the lights, the solenoids (playfield flippers and bumpers), and of course the power distribution itself. I bet most of that could be done with a single board today, though I haven’t opened up a more recent pinball machine to verify.

We got our machine when we lived in Spokane, WA and brought it with us when we migrated west. While we did get to play it after we moved, it eventually became non-functional. It was up in my office before where it was easily ignored by the rest of the family. It kept getting pushed down the priority list.

Now that the machine is sitting in the front room downstairs, it attracts a little more attention. There is a much stronger desire to get it fixed now that people actually see it and ask about it.

The guy working on mine works for one of the amusement machine companies nearby. He fixes people’s pinball machines on his off time. He’s been out a couple of times to work on mine and while it’s not fixed yet, we’re making progress and he feels confident it’s on it’s way back to health.

The first time he came out, the issue was believed to be related to a blown transformer. When he came out last week, we traced down a problem with the power cord then found several blown fuses, a burned out solenoid (for one of the bumpers), and what appears to be bad chips on the MPU board.

The good news is that he says the parts and labor to fix the MPU board will be fairly cheap. He has the my MPU board and can do the work when the parts come in and he has time. The new solenoid is also reasonable plus the labor, of course.

If for some reason the MPU board still doesn’t work,I can replace the MPU board with one of these guys, but that’s a $200 experience. However, it will add Freeplay to the machine, which allows people to play it without putting quarters in.

What actually amazes me about this replacement MPU board is that someone clearly took the time to redesign this part and make it smaller and better. Older pinball machines come with schematics for the major parts, which is a far cry from anything today. These schematics make it possible to make something 100% compatible, yet make it better, adding new functionality.

Maybe someday, when we have a little more room, we’ll consider getting an arcade machine in here. Or maybe we can get another air hockey table. My kids love air hockey. We’ll just be happy to get our beloved Eight Ball Deluxe machine functional once again so we can “Chalk up!”