Netscape Exiting The Browser Business–The End Of An Era 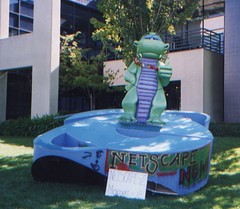 It almost seems anti-climatic for Netscape to finally say “we’re no longer supporting the Netscape web browser,” given that they’ve had their clocked cleaned by Microsoft and spun off the development effort to the Mozilla Foundation. However, for many years after they did this, AOL curiously kept pumping out a Netscape-branded web browser.

Why? The answer is in the Netscape blog: “While internal groups within AOL have invested a great deal of time and energy in attempting to revive Netscape Navigator, these efforts have not been successful in gaining market share from Microsoft’s Internet Explorer.” There was an effort to do this? Oh really? How come nobody in the real world noticed?

Granted, AOL did fund Mozilla development for years prior to and even after the founding of the Mozilla Foundation. Personally, I think that was a far better use of AOL’s money and time to fund Mozilla developers than to try and take it on at the corporate level.

And so at last the beast fell and the unbelievers rejoiced.
But all was not lost, for from the ash rose a great bird.
The bird gazed down upon the unbelievers and cast fire
and thunder upon them. For the beast had been
reborn with its strength renewed, and the
followers of Mammon cowered in horror.