An Ambassador For Nokia? 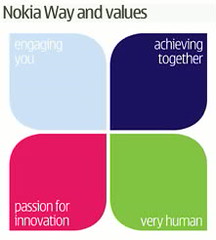 For the past nine years, I’ve worked at Nokia. It has had almost nothing to do with phones, however. In the beginning, when I was knee-deep in supporting Check Point FireWall-1, that was not necessarily a bad thing. Mobile phones weren’t quite as sexy in 1999 as they can be today, either.

Fast forward to 2008, and things have changed. I’m still working for the same group I started in. Thankfully for my sanity, I’m not supporting FireWall-1 anymore, but I still support a number of enterprise network security products.

A part of me really, really wants to be doing some of the phone-related stuff inside Nokia. It’s sexy and it’s what people know Nokia for. Outside of the enterprise network security circles, most people don’t realize that Nokia is even in that space. Those flashy Nokia N95-type devices? Not exactly needed to do our jobs, and the boss likes QWERTY phones, which means Eseries devices.

I recently had my annual performance review with my boss. No major surprises here, but the subject did eventually move into what it is I want to be doing later in my career. While I mentioned the phone stuff, what it really boils down to for me is simply being what I like to call an “ambassador” for Nokia.

I just love most of Nokia’s products–phones and those Security products that I support. I realize, of course, not every product is perfect. I haven’t drank so much of the Kool-Aid that I can’t see–or admit to–the flaws. However, I get a kick out of showing people my Nokia N95 or whatever Nokia phone I happen to have. I also like to share the things Nokia is doing and how they are relevant to the person.

Even if I can’t get a job working with the phones in some way, it’s not as if I hate my current job. My manager is awesome. I work with a good group of people. It has it’s challenges like all work situations do. There is plenty of opportunities even within this part of the business.

Meanwhile, I will continue to blog on The Converenge Zone (on s60.com), join programs such as the S60 Ambassadors, and talk about Nokia when and where it’s appropriate. It’s not my day job, but that’s never been an obstacle for my passions.