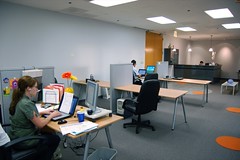 I realized the other day that I have spent far more time working at home than I have ever spent working in an office. I am a full-time telecommuter, and it has plusses and minuses.

There’s was an article in Ars Technica referenced on Slashdot about how as more people in a given office work, it has a negative impact on those not telecomuting. Most of the studies on telecommuting focus on the person telecommuting, not on how it might afffect the other people in the office. The major points from the study are that in-office workers:

In a large, multinational corporation like Nokia, even for people who aren’t telecommuting, but working in an office several timezones away, it can feel a lot like dealing with telecommuters. A lot of the same challenges are there, whether they are a few miles or a few thousand miles away. In that kind of environment, telecommuting is almost easier.

It is important to occasionally have some facetime with those people in either different offices or who telecommute. Even if you don’t have a spceific “agenda” in mind, just being around to build up those interpersonal relationships makes it much easier to work together despite the distance. Regular trips to the office has been a large part of why I have been so successful in my job despite being 700 miles away from the office.

So does large-scale telecommuting equal more office unrest? I don’t think so–provided the time is put in on a regular basis to build the team’s trust and interpersonal relationships. Because even though we go to work to work, we’re all social beings at the end of the day. Social currency can go a long way towards working through difficult issues or times.