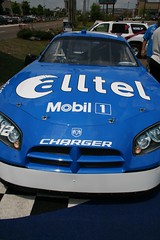 Alltel Wireless, the largest of the regional CDMA mobile network operators (MNOs) announced they are now giving customers the ability to “personalize” their voicemail greetings with one of over 500 sound clips from various TV shows, comedians, and top-selling musicians.

The service, called Voicemail MAX, and is available with select handsets only. If you decide to purchase one of these audio snippets for your voicemail, it’s going to cost you $2.99 for the privilege.

Unfortunately, I am unimpressed. This is the kind of craptastic innovation we can expect from the carriers, though. They haven’t figured out how to be nothing more than a dumb pipe. And what’s wrong with that? Nothing, if you ask me. In fact, you need to make the pipe bigger AND dumb with five nines of reliability. That would be true innovation, if you ask me.

And one other thing–instead of paying lip service to the whole idea of being an open network, actually be open. Of course, if you’re really nothing more than a fat, dumb pipe, you’d actrally be open instead of just another 20th Century telco.