Nokia N95 Finally Showing Up With A Carrier In The U.S.? 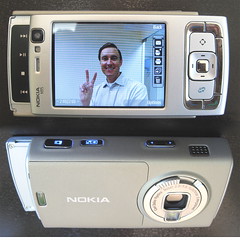 The rumor being reported by Engadget is that AT&T will finally get the Nokia N95-3 sometime in the second quarter of 2008. That’s funny because I’ve personally owned a Nokia N95-1 for at least a year, though it’s not the U.S. 3G variant which hasn’t been out quite as long.

In a way, it kind of reminds me of the Nokia 9290, the U.S. variant of the Nokia 9210 “Communicator” device. By the time the device hit the U.S. market–almost two years after the 9210 was released in Europe, GPRS data service was widely available in the U.S.. The 9290 only used GSM data (e.g. dialup at 9600 bps), making it far too slow to be useful for any data-intensive applications.

While there hasn’t been any major advancements in mobile phone technology since the Nokia N95-1 originally came out, and the N95-3 is miles ahead of anything currently available through a carrier store, I can’t help but wonder when the gap will decrease between device releases in Europe and in the U.S. will decrease. Using the above example as a reference point, it has, but I think it still has a ways to go.

What will be interesting in all this is what “carrier customizations” will be present on the AT&T version of the N95.  What differences in functionality will exist between an unbranded N95-3 and an AT&T-branded N95-3. I don’t know, but I do know that if the restrictions are too onerous, you can bet people will unbrand it as quick as they can.