How Do You Develop Film For A Digital Camera? 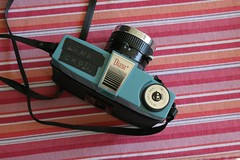 My mother-in-law was given a digital camera at some point, but was befuddled by something that’s relatively easy in the analog world: dropping off a roll of film. If you still take pictures with film, actually dealing with the film is a simple matter of taking it to the drug store or some other place that can develop it.

In the digital world, that’s changed. If you want to make alterations to the pictures before developing them, that’s relatively straightforward–if you know how to do it. However, if you want to just take out your memory card and “drop off the roll of film,” you’re talking to a kiosk.

Other than the fact you might lose the SD card–something that can happen with film just as easily–why don’t places let you just drop off your SD card to get the photos off? Or why can’t the kiosks have a simple “develop all photos” button on the touch screen when you stick it in? Bonus points if you offer the option (for a few dollars) of burning the photos to a CD and wiping the SD card as well.

Maybe some place is actually doing digital photo development right. If there is, please post in the comments, as I most certainly don’t know.