Why I Don’t Use VoIP On Mobile Handsets 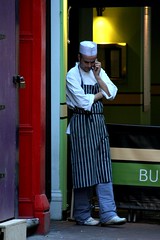 There are a lot of great companies out there that offer some form of VoIP on a mobile handset. The VoIP can occur over either a WiFi, 3G data connection, or come in over the normal GSM or CDMA voice channel. Regardless of the method used, I have made an active decision not to use these services on my mobile handset.

Now I want to be clear–it’s not because I don’t think the technology is neat. I like it. There are actually three reasons I refuse to do it: different interface to make a call, battery life, and (lack of) cost savings.

First, let’s talk about the user interface. Making and receiving calls on phones is a fairly straightforward activity. However, many methods of using VoIP on the mobile handset change this somehow. The best interface is actually on WiFi-enabled Nokia handsets where, if you have VoIP configured properly, making a VoIP call is actually as easy as making a regular call through the GSM network. There are other services that run on Nokia handsets that will dynamically reroute calls through a different number in order to save money.

Second of all, battery life. This doesn’t apply as much to the services that don’t run over 3G and WiFi, both notorious battery drainers. However, an application running on the phone does take up some battery life, so it’s not an entirely zero sum game.

The third, and perhaps most important reason I don’t use these services regularly is the lack of cost savings. Ignoring the fact my employer pays my bill each month, calling within the United States is basically zero extra cost. It’s included in the per-minute rate. I quite simply don’t make that many international calls. The one or two I do make, my employer will pay for, no questions asked.

Let’s review: changes the way calls are made, less battery life, and lack of savings. Doesn’t sound like a winning combination in my book, but maybe your situation is different.