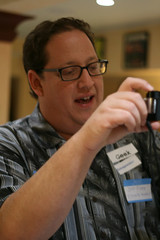 In what had to have been one of the more difficult decisions he’s had to make, Jeff Pulver announced that he resigned from the Board of Directors at PulverMedia, the company that bares his name. There was some rumors that things were not well at PulverMedia, but Jeff had been understandably quiet on the issue up to this point.

Given Jeff’s relative level of transparency, I’m sure it is difficult for him to keep quiet, saying only as much as he can. That being said, this may be the closing of one chapter, but the next chapter is already in progress.

Like Andy Abramson, I thank Jeff Pulver for his voice, video, and vision, to borrow a tagline from a previous VON show. I have no doubt we will continue to see it, hear it, and be a part of it.