Is This Thing On? 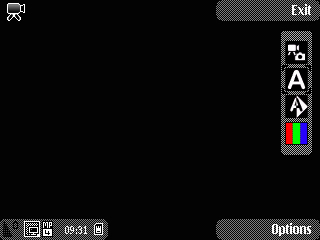 Can you tell by looking at the following screens which one is recording and which one isn’t? You can? Good for you.

Most of the people that read this blog should be able to figure this out. Perhaps without what is being videoed showing, and you know what to look for, you know the difference between recording and not.

Enter my wife. Normally, if she needs to take videos, she uses a Nokia N93 I have lying around. Today, the battery was dead, so I decided to lend her my Nokia N95 instead. Same video quality, different form factor.

When she came home, we discussed her video taking experience. It was horrible, as it turns out almost ALL of her experiences taking videos with the phone ends up being.

It boils down to one simple fact: she has no idea when the thing is actually recording. I showed her how it shows it’s recording, the little red area on the bottom. To her, that “blends in” and doesn’t stand out well enough. The “Pause” button is even more confusing, because to her, it means the camera is paused, especially since there is no obvious indication.

The solution to this problem would be dirt simple: a nice, large red REC in the upper left or right corner of the viewfinder. Something that emulates what you might find on a conventional video camera. Something obvious that you’re actually recording.

While I know Nokia internally beta tests products–I’m participating in one such test right now–I wonder how much outside testing is done with people like my wife. Someone who is not a mobile phone geek and doesn’t want to become one.

My wife wouldn’t mind carrying around a device like the Nokia N95, complete with the video and picture capabilities it has. However, the phone itself needs to be usable as a phone–the Nokia N93 fails due to it’s size and awkwardness as a phone–and that extra functionality needs to be easy to get to and intuitive to use.

Based on the fact I have to train her each time she uses either my Nokia N93 or N95, or she has to spend too much time familiarizing herself beforehand, I’d say the usability fails the “normal person” test.

Needless to say, I filed an improvement request on the device I am testing to make the recording indication a lot more obvious to people who aren’t geeks. It may not seem like much, but those little things make a big difference to people like my wife.