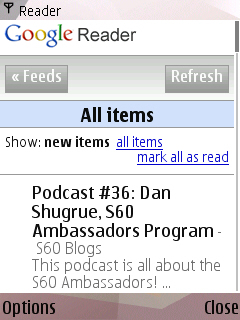 I’ve had some time to kill lately. One of the ways I’ve done that was keeping up with my RSS feeds in Google Reader. I spent a lot of time in the iPhone interface, available at http://www.google.com/reader/i/.

While this interface as obviously designed for the iPhone, it works perfectly on my Nokia Nseries handsets as well as my Nokia Internet Tablets. I was able to peruse my RSS feeds 15 items at a time, or I could drill down to specific feeds if I chose to.

The interface, while a little Javascript heavy, works pretty good even when limited to EDGE speeds. If I was not careful, I could easily exceed the capacity of the device if I tried to “see the original” article while in this interface. Was less of an issue on the Nokia Internet Tablets, but much easier to do on my N95-1.

All in all, it’s a satisfying experience for a mobile handheld.