What Do I Do With All These Phones? 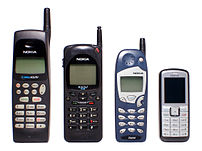 I don’t think it’s any huge secret or anything that I’ve got a lot of phones lying around. I have at least three just within a couple of feet of my keyboard!

I recently got an email from the folks at Comunicano about their “No Phone Unused” initiative. Comunicano runs a Blogger Relations program for Nokia, which means they’ve sent out a lot of phones, boxes, packaging, and what have you. The “No Phone Unused” initiative is to ensure all these bits are recycled, either through reuse with other bloggers or sent back to Nokia for proper recycling or disposal.

I could probably be a bit more aggressive about recycling my phones, but I do have a couple of reasons for keeping them around:

2.  I frequently gift phones to people. A few weeks ago when I was in Ottawa, a new co-worker had gotten her new AT&T SIM and whatever low-end Nokia phone AT&T had at the time. Unfortunately, most of my co-workers demand–and need–Eseries phones. I brought a couple of spare phones with me on the trip–including a Nokia E61i. I wasn’t using it, she needed one, so I lent it to her. Simple as that. I may get it back eventually, after they are done doing some additional tests with it. I’ve also gifted phones in non-work circumstances as well.

When I have decided to “let go” of a phone and can’t gift it to anyone, I bring it with me on my next trip to the office and recycle it in one of the handy phone recycling kiosks. As I said, I probably need to do this more often.

There are a few phones, however, that I can’t do any of these things with. These phones are prototypes. Prototypes are Nokia property. I can’t give these phones away and they must be given back to appropriate individuals to be dealt with accordingly.