Comcast: Sell Me The Shows, Already! 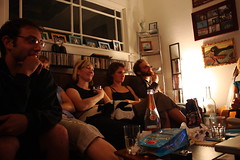 After thinking about the Comcast 250GB cap thing a bit more, I really think the caps are *anti-competitive. *Yeah, I said it, anti-competitive. Why? Because watching video downloaded over the Internet–particularly high-quality video–will make it very easy to meet or exceed that 250GB cap. And guess who is losing out when you view video over the Internet? That’s right, the cable operators.

For example, in order to get the program Battlestar Galatica over cable, for instance, I have to subscribe to a package that contains the SciFi Channel, where it is on in the United States. That would more than quadruple our nice $13/mo bill for cable television, not to mention bring in a bunch of other channels I don’t want in the house. And if I want Penn and Teller: Bulls***!, I have to subscribe to Showtime, adding another $12.95 a month to my cable bill!

If I simply acquire these shows on the web, downloading them over my Comcast connection, I can do it cheaper than my cable TV bill would be and I get the benefit of being able to watch the program when and where I want to. I am not paying for programs I don’t want to watch.

Here’s my question: why can’t Comcast deliver me these shows? In a sense, they are, but why can’t I download the television programs from Comcast directly? They’re already getting the shows to deliver to us over a conventional broadacst television system. Why not package up the individual programs and sell them a-la carte to consumers?

The programs you buy from Comcast could be delivered by a PVR that they lease you or digitially to a computer, using either Windows Media or working a deal with Apple for iTunes support. Or better yet, ditch the DRM entirely!