VoIP in a Down Economy 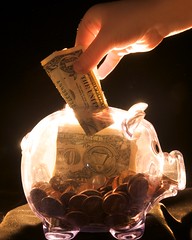 It’s funny. People like me that have been following VoIP for a while have gotten so over the fact that VoIP is about saving money. In fact, we often think that VoIP-related businesses that are just in the business of shaving a few fractions of a cent off the cost of a call are going to fail, given that call costs are approaching zero.

But then you look at the state of the global economy. It’s hard to escape the news that the U.S. Stock Market is trending downward, fluctuating wildly, and industries all over the place are in trouble. You know it’s bad when the Sequoia Capital says it’s bad. Even the folks that make staples like aluminum are having trouble.

While VoIP does provide a way to offer lots more functionality than is possible with traditional telephony, I would not be surprised if in these tough times, cost becomes a huge factor in people’s decision to try–and use–VoIP related services.

Of course, one should be careful about what service you use. Given the general state of economy, I would expect smaller, less established and capitalized services will fail. I would tend to stick with the big name services like Skype, Gizmo5, which you can use on any PC, Mac, or Linux machine with a headset and microphone. If you want something that works like a regular telephone service, something like Vonage or VoicePulse. If you want video calling, I can’t recommend SightSpeed enough!

If you don’t want to invest in hardware, you could use a service like Jajah Direct, which lets you use your regular phone to make cheaper International cals. Jajah‘s also providing their telephony infrastructure to many partners such as Gizmo5. They also just recently added SupportSpace, Communipedia, and Momail as partners!