Andy Abramson wrote a nice piece on how Twitter might make money. Advertising is certainly one way for Twitter to make money, though I will admit it shouldn’t be the only way. Changes are, you’ve received a “tip” as part of your tweet like so: 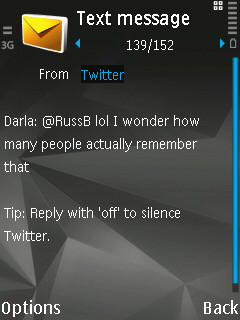 Who is to say instead of a tip, there couldn’t be an ad there? Surely, there’s at least some money in that. Or what about Google ads on the web and mobile versions of Twitter? Again, it’s not a lot, but surely it’s more than they’re doing now.

Now let’s be clear about something. You can’t use Twitter in the same way that you can use a lot of other mediums. It’s not really a wide broadcast. It’s more of a micro broadcast to your followers. There’s no guarantee that they will read or respond to it, given the relative noise level on any given Twitter followers.

The trick, therefore, is, getting people to follow you and then engaging your audience. No small feat, but certainly possible if you are, say, a presidential candidate, or advertising a popular TV show. Or maybe a rock musician.

Some examples of this I’ve seen include:

Who’s to say that you couldn’t execute some viral marketing on Twitter? Given how quickly Amber Alerts have spread all over Twitter, it certainly seems like it’s possible

Customer service of sorts happens over Twitter. I know I’ve vented about Boingo on Twitter and they’ve done a good job of monitoring for problems and fixing them. The Comcast Cares account on Twitter is another fine example.

I also wonder if Twitter itself could be a form of entertainment. Could a made-up drama of sorts play out over Twitter, complete with product placement?

What are some ways that Twitter could be used in or for advertising?