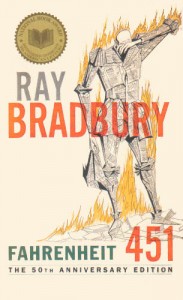 There are many books I have not read by the great Ray Bradbury, but one that I’ve heard about on and off over the years was Fahrenheit 451

. The title comes from the fact that paper catches fire at 451 degrees Fahrenheit, and a lot of paper–in the form of books–are burned in this story.

Prior to reading the book, I watched the 1966 movie of the same name, which adapted the book for the silver screen. While the basic story is the same, the movie changed several critical elements of the story. While I found the movie to be good, the book was far better.

Despite the story being more than 50 years old now, it holds up surprisingly well. We’re still waiting for the mechanical hounds, televisions are as huge as walls and people walk around oblivious to the world with contraptions in their ears. There is more entertainment than you could possibly shake a stick at.

While there are several themes in this book, the one that resonated within me the strongest was the rage against conformity. Throughout the book, society was immersed in televised and auditory media designed to delight and entertain, not to provoke any serious thought. The educational system of this fictional future society reinforced this by keeping children busy with memorizing facts and activities, giving them no time to stop and think.

The reason books were burned was because they promoted independent thought–thought that might make people unhappy. This fictional society saw this as a bad thing. Books were made illegal and firemen–with a long history of putting fires out–were charged with actually starting fires–namely to burn books.

The fictional “conformed” society reminds me a bit of the blogosphere. While there are many, many voices in the blogosphere, there seems to be a lack of differing points of view. We call this the “echo chamber,” and I could not help but draw a parallel to the fictional society in Fahrenheit 451.

I think the echo chamber, among many other factors, has dampened my passion for writing. The reason I am reading actual books versus the same old stuff in the blogosphere is that I am trying to find some new ideas and reawaken some old ones. Sure, you can find new ideas online, but I think a change of venue from the computer screen to a book is part of the process.

In any case, this book is very good. Highly recommended read. Even though I am not a fast reader, I was able to finish this book in the course of a few hours. It will certainly give you something to think about