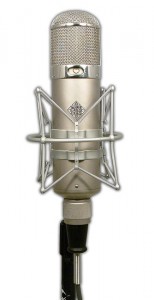 If you’ve ever listened to the album Joe’s Garage by Frank Zappa–highly recommended–you’ve heard the phrase “It looks just like a Telefunken U47.” As a kid, I had no idea what it was, or if it was even real.

Turns out, it is a real thing. Specifically, it’s a microphone originally sold and distributed by the German radio and television company Telefunken in the late 1940s thru 1958.

Apparently, Frank Zappa collected and used vintage German microphones like the Telefunken U47. In fact, his collection was restored between 2005 and 2007 by Telefunken USA, a company that is dedicated to repairing various vintage Telefunken microphones as well as creating faithful reproductions.

Telefunken USA has a couple of different recreations of the Telefunken U47, this one being the Telefunken U47V Long Body. Using a combination of new old stock parts along with custom-made parts, these microphones are hand-assembled to be as close to the originals as possible.

According to Telefunken USA, the U 47V is big and warm, with a velvety upper mid-range and top end, making it an excellent choice on many sources including vocals, upright bass, brass instruments, and acoustic guitar.

The mics are only available through Telefunken USA and due to the nature of the parts they use, quantities are limited. I have no idea what this might cost, but if you’re looking for a high quality mic, this might be the one for you.