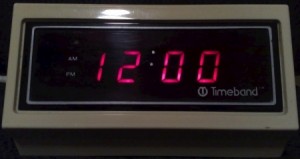 As I ran across a rather ridiculously priced alarm clock not too long ago, I couldn’t help but think of my old, dead friend, the Timeband Model C-6110. It was made by the legendary Fairchild Semiconductor.

My mom bought this clock somewhere between 1976 and 1977–at least that’s when I first remember seeing it. I ended up with it, eventually. It was in more or less continual service up until it died about this time last year.

Itâ€™s your basic run of the mill alarm clock with two important features: it could keep on ticking if a momentary power glitch occurred, and it had an alarm that could wake the dead. My wife hated it for that very reason. Needless to say, that function rarely got used after I got married.

I have no idea what this clock cost. Whatever it was, Iâ€™m sure we got our moneyâ€™s worth. It lasted far longer than anyone thought it would, Iâ€™m sure.