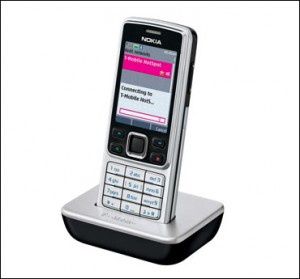 I recently signed up for the T-Mobile @Home service through the folks that support voice services at Nokia, where I work. I was sent a Nokia 6301 along with the Hotspot @Home router. The draw? Free calls on the home WiFi, or in earshot of any T-Mobile Hotspot. Why not?

Normally, I would not be buying–or necessarily wanting–a phone like the Nokia 6301. I am quite firmly a smartphone user. The Nokia 6301 is most certainly not a smartphone, but if you want the free calls over WiFi, this is one of the handful of phones T-Mobile sells that permits you to use the Hotspot @Home service.

The technology behind T-Mobile @Home is called UMA. I won’t get into it in detail here, but in short, it allows seamless transitions between your home WiFi and the mobile phone network. I cover UMA in a little more detail on phoneboy.com.

Now, onto the phone hardware. It’s a pretty run of the mill S40 5th Edition FP1 device. Has the usual assortment of keys on the front, power button on the top, volume control on the right side, a 2.5mm headset jack, power, and a not-very accessible USB port. On mine, I basically have to take the back cover off in order to be able to get the port cover off.

Once you take the battery cover off, you can also access the MicroSD slot. The device comes with a 512mb MicroSD card that you can load with music or use to store pictures taken with the 2 megapixel camera.

Unfortunately, I have been spoiled by the two variants of the N95 that I currently have as well as the older N73 and the newly arrived N96, which I will cover later. The 2 megapixel camera on the Nokia 6301 certainly won’t win any awards, but it takes servicable pictures, as shown on my Share on Ovi account. The one feature the Nokia 6301 camera DOES have is the ability to take pictures in landscape mode, giving you a 960×1280 picture. You have to manually put it in that mode, but it’s a nice touch that it has that feature.

The phone has an Active Standby screen like my Nokia smartphones have, but it is disabled by default. Once it is enabled, you can have a number of icons display along the top–you can choose as many as you want among the pre-selected choices. There’s also sections for Music/Radio, Calendar/Notes and more. You can even customize in which of these sections–if any–these will show.

The features are nice, but the real test for this phone is the sound quality–particularly over WiFi. I called someone today and talked with them for an hour on my Nokia 6301 using my home WiFi. They had no idea I was on a mobile phone, much less over WiFi. The audio quality–for both of us–was that good.

I also tested the phone handoff between WiFi and GSM. I started a call with 800-555-TELL (a.k.a TellMe) and played the blackjack with the lovely Sean Connery impersonated voice. The call didn’t miss a beat, though there was an audible “thunk” when the call handed off.

I tried the web browser, which is a fairly basic XHTML/WAP browser. It’s functional, but it’s not the Webkit-based browser that’s on my Nseries devices. Of course, when you’re not in WiFi range, you really don’t want to be web browsing much since the phone only supports GPRS on T-Mobile’s US network–not even EDGE.

One note about the WiFi on this phone: it is only provided for use with the T-Mobile @Home service, or whatever UMA service provider you buy the phone from. It will not work independently of UMA. The good news is that while you’re in range of a configured WiFi access point, the data transfer is much faster.

One downside to S40 devices is that contact and calendar sync are a little more of a challenge. T-Mobile has a (presumably subscription) service where you can sync your stuff to the cloud. Since I have no interest in that, I set up PC Suite on my work computer and am syncing my calendar and contacts over Bluetooth. The phone also, surprisingly, has Nokia’s “Phone switch” application, which makes it possible to sync information between phones.

All in all, the phone is not a bad little device. It’s probably something I’ll carry alongside something more functional and with an AT&T SIM, but for a voice-centric device, it does the job.