Tritton AXVisor: Nice Idea, But It Doesn’t Work For Me 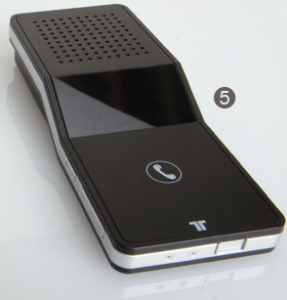 I really tried to like the Tritton Technologies AXVisor, which is a bluetooth handsfree system that clips to your visor and provides speakerphone capabilities while you’re driving. I found the device relatively easy to pair with my Nokia handsets and the controls were pretty good. Unfortunately, the device falls apart in the most important feature: being able to hold a conversation.

While I can certainly hear people loud and clear, the same cannot be said for my voice to the caller. Being a Nokia boy, I’ve tried a number of my Nokia handsets with this device. None of them provided adequate voice quality while driving or in my house at home.

The scary thing is that this is the second device the Tritton folks sent me. The first one I was not heard at all. I think it was a defective unit. This one is clearly working, but not well.

I’m really not sure if it’s this device or an endemic problem with Nokia’s bluetooth stack as I have yet to find a single bluetooth headset that sounds good enough that I’d actually want to use it for more than a few minutes. I’d much rather use the built-in speakerphone on the Nokia handsets or simply use a wired headset than use anything bluetooth.

I certainly can’t recommend this device with a Nokia handset. Maybe it will work better with a different handset, I don’t know.