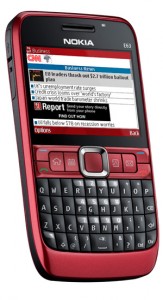 The Nokia E63 is a lower-cost version of the wildly-popular Nokia E71 that was released several months ago. It’s a little thicker than it’s cousin, and the case is plastic instead of metal. It also downsides the camera to 2 megapixel without auto-focus, and loses HSDPA data and GPS.

However, the handset still has a 320×240 color screen, 3G data (at UMTS speeds of 384k/s), WiFi, an awesome keyboard, and the ability to easily switch between home and work profiles. And it has something the Nokia E71 doesn’t have: a bog-standard 3.5mm headset jack on the top of the handset!

The price is certainly right on this handset: 199 EUR before taxes and subsidies. Three variants are being produced to account for the different 3G frequencies around the world, including for the North American market, i.e. for use on AT&T and Rogers. No word on whether or not we’ll see this device taken by a carrier, but this device could easily become under $50 with a two year contract!