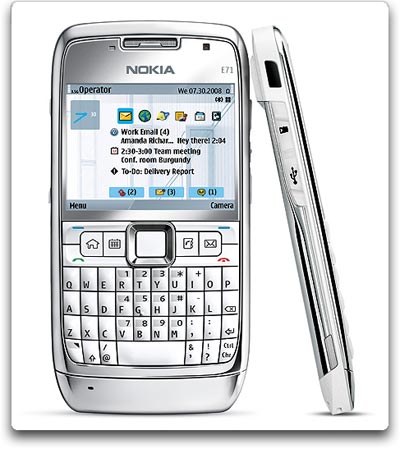 Tuesday, I received my white Nokia E71. The phone’s been out a while, as I’m sure anyone who follows a Gadget blog or reads Wired can tell you. Since I work for Nokia, you should realize the following is my own opinion on the Nokia E71 NAM, i.e. E71-2, RM-357, or at least one other name I’m not allowed to use in public.

The first thing I noticed when I opened my package was how small the box is compared to even the N96 I received not too long ago. It’s about half the size. Inside the box, pretty much everything inside that wasn’t shrinkwrapped was cardboard instead of plastic, making the packaging a lot more recyclable. Very green, even if the inside of my box is mostly black

Inside the box, I got the phone, battery, 2.5mm stereo headphones–more on that in a minute–power adapter, micro USB cable, manual, CD. Pretty much everything I expect to come with the phone, though the matching wrist strap and carry case were nice bonuses.

I had seen and even handled some pre-release versions of this handset, but they are never as good as the production units. This one felt wonderful. Solid construction, not too big. The keys are crammed together, but it’s pretty easy to push the right ones.

Powering on the phone for the first time, I was greeted with the usual questions for a Nokia: region, date, and time. It’d be nice if it could read it from the SIM card and set the time according to the GSM network, but it wasn’t any worse than other Nokia devices I’ve used.

The Active Standby screen looked a bit different. There were links for setting up email and Internet calling (VoIP), a new indicator for text messages, one for voicemail (allowing me to set up which voicemail # to use), and a new icon I haven’t seen before, which you can see in the upper right corner of this screenshot: 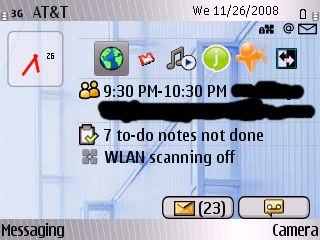 This is the vaunted “profile switch” icon. Click it, and your theme and Active Standby screen change. The above screenshot was my “work” profile, here is my “home” profile: 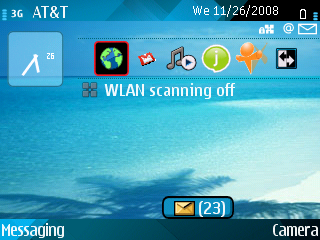 When you navigate to the envelope on the bottom, which indicates the number of unread texts I’ve got, you get a curious little menu: 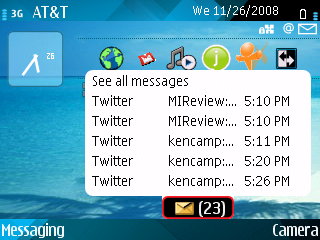 Email works as it does on every other Nokia S60 device, though the process for setting up your account has improved quite a bit. Enter your email address and password, and it magically figures out what the rest of the important settings should be. It won’t work in all cases, but for the major services, it should work.

If you want corporate email, and your company as an ActiveSync (Microsoft Exchange) server, you are going to need to download Mail for Exchange. It is easy to find in Download! > Applications. The setup on this application has improved substantially over the years, though it does ues the standard Nokia S60 mail client, for better or worse.

Nseries Features on the E71

What I especially appreciate about the E71 is that many of the features I’ve long enjoyed in the Nseries devices are finally included on an Eseries device. For example, Podcasting is included. The music player understands podcasts and properly resumes when you’ve stopped a podcast in the middle of playing. The camera application looks exactly like it does on my Nseries devices. Even Share Online 3.0 is included!

I was also surprised to find the phone has an FM radio. Like the Nseries devices, it requires wired headphones to be plugged in for the antenna. It works the same way. Internet Radio isn’t included, but is easy to download in the Download! app under Applications. With it, one can listen to any number of Internet-streaming radio stations.

One other nice feature: A2DP. It’s supported and works with any A2DP-compliant set.

One other important feature that the phone has, but requires the (free) download of Birdstep SmartConnect from the Download! app: the ability to use Access Point groups. What this allows you to do is combine both 3G/EDGE and WiFi access points into a single “group.” This group can be specified wherever any access point can be specified. The app will try, in order, each access point listed, using the best one.

One other thing of note with SmartConnect: it appears as a GPRS access point instead of as a WiFi access point, which is how Psiloc Connect operates. The upshot of this is that it will allow apps that insist on sticking with a 3G/EDGE access point like Jaiku can actually be used over WiFi! In the case of Jaiku specifically, you must do the initial configuration with the proper 3G/EDGE access point, then switch over to the virtual access point. Works lovely!

This dainty little package includes a massive 1500 mAh battery, meaning even with 3G enabled, the phone might actually last the day. Battery life depends on a number of factors, including usage patterns and your location relative to the network, so I can’t guarantee that it will last the day for you. More testing is needed for sure.

I find that SmartConnect improves my battery life since I spent a lot of time in WiFi range. WiFi takes a bit less battery than 3G does and I have less concerns about the backhaul situation on my home WiFi

The Bad and The Ugly

All is not perfect in the E71. The camera, while a respectable 3.2 megapixels, is not the sharpest tool in the shed. I’ve been spoiled by the N95 and N96, which both have much better cameras. While the extra “features” in the camera app will help somewhat, I’m better off carrying the N95 8GB or N96 with me for any semi-serious photo opportunities.

The headset jack is Nokia’s non-standard 2.5mm jack and it’s on the right side. While a wired headset is included in the package, it makes finding replacements a bit harder. Personally, I’ve opted out of using a wired headset and went straight for Stereo Bluetooth. It’s nice to see they corrected the headset jack in the cheaper cousin, the E63.

Speaking of Bluetooth, I see various and sundry issues with A2DP. The headset I use from Insignia seems to get confused between “headset” and “headphones” mode when left for an extended period of time. I have to shut the bluetooth off on the phone, wait a few seconds, then enable it again. It seems to recover after that.

The GPS in the phone doesn’t seem to work as well as the N96 or even the N95 8GB does, both of which seem to work indoors to a certain extent. The E71 doesn’t appear to work in my house well enough to get a lock.

While the keyboard is small and usable, the “chr” key gets used a lot more on the E71. This is because a lot of punctuation that existed on the E61i and E61 are no longer available on the main keyboard. The main things I am missing are the parenthesis, but there are many other keys as well. Take a look at the E61i keyboard versus the E71 keyboard:

The main reason you’d want the parethesis: smileys. They’re a little harder to do on the E71.

For the moment, the E71 is my primary phone. It’s nice to have a QWERTY device that’s not too big and brings along a lot of Nseries features for the ride. However, the lack of a decent camera means I’m often carrying a second device with me.