While I was on my trip to Israel, I had to factory default my Nokia E71 because it was starting to act funny. While reinstalling RoadSync, Gravity, and most of my other apps wasn’t a big deal, as I keep copies on my MicroSD card for just this reason, reinstalling one of them–one I bought from Nokia’s Ovi Store–turned out to be not possible.

While I grumble with the fact that mobile apps are tied to the IMEI of the handset–think of it as a unique serial number for a GSM-based mobile phone–it’s a fact of life I’ve grown used to. Some application providers do not allow you to move applications between handsets, others do. Either way, getting an application reinstalled on the same device you purchased it for should be doable.

I had saved the installation SIS file for JoikuSpot on my MicroSD card, so I reinstalled it. However, it was not automatically licensed, so it came up in demo mode. I next tried to go to the Ovi Store on that very same E71 I purchased it on. I went to the “My Stuff” section in the Ovi Store app: 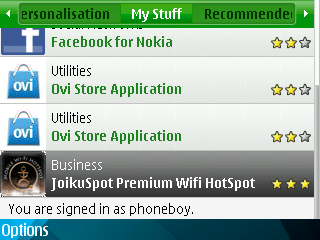 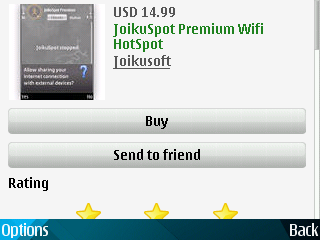 Hey wait, didn’t I buy this app already? From this phone? Why would I want to buy it again. Nowhere on this page does it give me the option to redownload. Nokia, you know I bought this app, why won’t you let me download it?

I checked my email for the receipt to see if there was a license key: 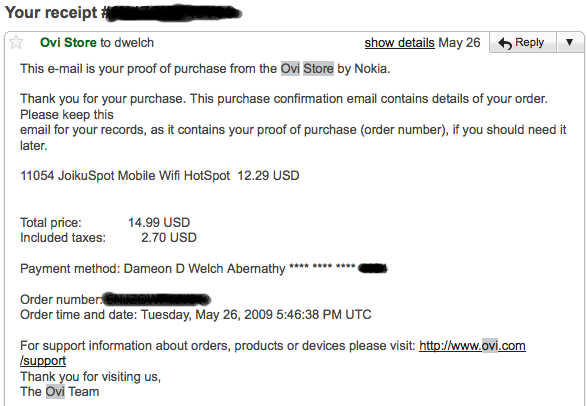 Nope, not there. So I go to Ovi Store on the web. There is nothing in their FAQ about what happens after you download an app. What? Ok, time for the contact page. It appears to be a general Ovi contact form. Nothing about botched orders, order status, or anything on this contact page.

Clearly, Nokia didn’t think this part out. And I know I’m not the only one who has had problems. Matt Miller had issues getting his app redownloaded as did many of Ricky Cadden’s readers.

I can’t believe that Nokia had absolutely no foresight that a download failure might happen or someone might have to reformat their phone and redownload an app. There is absolutely no provisions made for these situations other than contacting Nokia Care, which who knows how long that will take to properly respond.

Having worked for Nokia and met some of the people in the Care organization, I know that people inside Nokia care about these things and are likely as frustrated as us end users are over the stupidity of this situation. That being said, until Nokia makes it so you can easily redownload purchased apps from the Ovi Store and/or provide the license code as part of the purchase process, I cannot and will not recommend that anyone by any apps from the Ovi Store.

Hopefully, someone had a happy ending with one of these experiences. Did anyone either get their money back or get another chance to redownload their app from the Ovi Store? Let me know your thoughts.