That’s quite a bold statement to make regarding an application, particularly one for a mobile phone. However, even with the read-only beta of this application, Gravity completely changed the way I used Twitter. 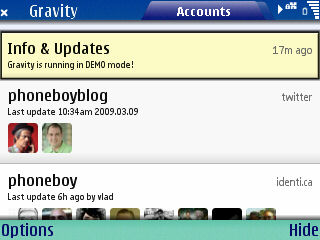 The short version: Gravity is the first proper Nokia S60 3rd and 5th edition application that allows you to interact with Twitter as well as services that use Laconica (e.g. identi.ca). Aside from sending tweets (duh), you can look at your replies, instant messages, search Twitter, with support for multiple searches, post pictures to Twitpic, follow links, (un)follow people, mark favorites, and probably a few other things I’m missing. In short, it is just about everything you can ask for in a Twitter client.

What Jan Ole Suhr has managed to do is take just about every cool feature that I’ve seen on a desktop Twitter application and shrink it down to the mobile phone, yet keep it simple and relatively straightforward to use. It’s the perfect application to feed your Twitter addiction wherever you are!

In many ways, Gravity fills a hole left by Google’s abandonment of Jaiku. Their mobile client, at the time, was what made the service useful. With the stagnation of the client and the various changes that have occured, Jaiku is no longer a useful service for me and many of their early adopters. Gravity is still limited by Twitter’s limitations, but the features it brings make using Twitter from your mobile handset a heck of a lot easier!

Of course, the app isn’t without it’s faults. Here’s the bugs I’ve found so far:

That all being said, it is fantastic for a 1.0 release, which has had a couple months of beta testing before it showed up for public consumption.

The app costs $9.95 USD to buy. Some might complain that’s too much, but given the lack of choices out there, I don’t find the price objectionable. Like most paid mobile apps, is tied to your handset IMEI. Unlike most apps, however, there is no “license key” as such to type in to active the handset. Once you’ve registered your purchase on the web, your version becomes fully functional. In “demo” mode, you can post tweets and twitpics for 24 hours and use the app in “read only” mode for 10 days.

One might question why I bought this when it is rumored that Twittix is coming out in just a couple of days. Will Twittix be better? Will it be cheaper? It doesn’t really matter, because Gravity is hear now and does the job well enough. Jan Ole has proven himself responsive on feedback, both good and bad. $9.95 is a small price to pay for showing your support.

The one thing that is clear, though, is that Gravity has set the bar pretty high for Twitter clients on Nokia S60 devices. The folks behind Twittix have their work cut out for them.