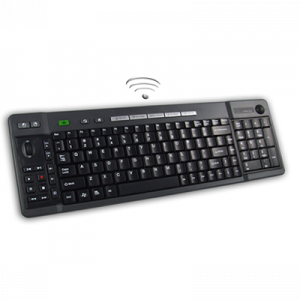 Keyboards are a rather personal thing. You either like them or you don’t and there is plenty of wiggle room depending on what is important to you.

Adesso’s PR firm sent me a Wireless Media Center Keyboard with Optical Trackball to review. It is geared for people with media center PCs, though it works ok with my Mac as well.

The unit comes with a USB dongle that blinks blue whenever you push keys on your keyboard. It communicates with the keyboard over 2.4 Ghz, which is also used by Bluetooth and WiFi. I haven’t noticed any interference problems as of yet, but the keyboard and mouse are less than 1 foot apart in my normal usage. Supposedly it works up to 100 feet away, but unless you had Frank’s 2000 inch TV hooked up to your computer, I doubt you could actually see what you were typing on the computer from that far away.

The keyboard has some media keys to control audio, the TV channel, and the volume. Surprisingly, most of these keys actually work on iTunes on the Mac just fine. The channel buttons seem to function as a sort of page-up/page-down kind of thing. There are also a row of 8 buttons along the top that don’t appear to do anything on the Mac, but are supposedly for Windows Media Center .

The other important feature this keyboard has is a track bar, scroll wheel, and mouse. They work well enough, but I would have preferred the buttons to be to either side of the trackball (e.g. for left and right clicks) instead of being on the opposite side of the keyboard from the trackball!

I find that certain keys on this keyboard tend to require a bit more force to ensure they register properly, like the right shift key and the spacebar. This is not a unique problem to this keyboard as I find that many modern keyboards suffer from this “mushmellow” syndrome. I also find some keys are put in somewhat odd spots, which often happens when keyboards are made smaller.

What’s the verdict for $74.99 US? I like the wire-free operation, but it’s not necessary as I’m usually sitting at a desk anyway. I’m also not as big on controlling media from my keyboard. It would be great for that, of course, but its not something I do with my computer on a regular basis. It’s not a great fit for me, but if I needed a keyboard for a media center PC, I’d consider getting this one.