How To Find Yourself on a Disconnected iPhone 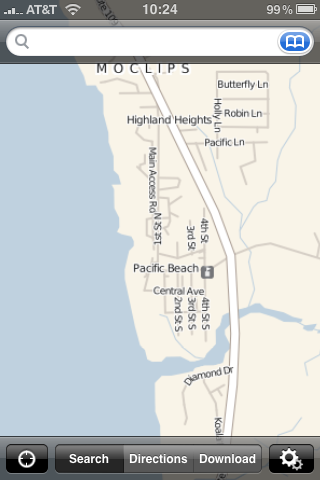 Last week, I spent a couple days in Pacific Beach, along the coast of Washington State. For someone like myself who grew up on beaches in Hawaii and along the central coast of California, going to the ocean on Washington State is a completely different experience. Let’s just say you go there to cool off, not to bake in the sun and surf. The kids don’t care, though, they play in the sand and the water all the same.

Meanwhile, there was nothing in the way of connectivity at the beach. The house we rented advertised WiFi. Sure enough, there was a cable modem plus WiFi router in the house. But the Internet did not work. Trust me, I tried everything. Mobile phone coverage cut out after Hoquiam, which was a good 30 miles of driving from where we were.

In short, I was completely cut off from real-time connectivity. What a vacation should be. Of course, being the geek I am, I decided to explore how well the iPhone operates completely offline.

Even of you turn off WiFi and are on Airplane Mode, apps that need data from the network will fail gracefully. The built-in mapping application tells you that it needs access to data in order to operate. A shame, but as they say “there’s an app for that.” Too bad I found out about OffMaps after my trip instead of before.

Unlike the Google Maps application built into the iPhone, which does not allow for offline use, OffMaps actually supports offline use. It uses maps from CloudMade, which are maps based off the Open Street Map project. These are a wiki-style map that use a combination of publicly available map information and user contributions. This means that maps may not exist or may not be complete for some areas, but unlike Google Maps, you can actually fix it. Programs like OSMTrack make it easier to add information to the Open Street Map project by saving GPS traces and uploading them straight to the OSM project.

The way you download offline maps for OffMaps is fairly straightforward: click the download button, select the area you’re interested in with a rectangle, and select the zoom levels you want. This allows you more granularity than what I was getting with Nokia Maps. I can select the specific cities and areas I am interested in at the resolution I care about. I can, for instance, select specific areas in the San Francisco Bay Area and not the entire state of California. Or I can get the maps for the specific areas of WA state I am visiting.

The downside to this approach is that you can only download ~150mb of data at a time through the app, WiFi or otherwise. And, of course, it can be a heck of a lot of data at some zoom levels–substantially more than with Nokia Maps. It’s also harder to do gross-levels of granularity (e.g. a state or a country) because you have to select with squares.

One other note: while you can make changes in Open Street Map, they can take more than a week to show up on OffMaps. This is because OffMaps uses the maps from CloudMade, which puts out new map renders each Friday based on map data from Wednesday (two days prior).

All in all, this is a very handy application to have on your iPhone. Worth $1.99 for sure.