The phone came in a FedEx box and was clearly used in other reviews. It came with a USB cable, a power charger, an inactive T-Mobile SIM card, and a CD with their version of PC Suite and other documentation.

The phone did not come charged, so it would not power up out of the box. I figured the USB cable would work for charging the phone, but not so. Instead, if you want the phone to be charging AND hooked up to the computer at the same time, you have to daisy-chain the USB cable into the power cable, which has a convenient port on the back of the plug for this purpose. This is worse than having a separate plug for charging the phone! 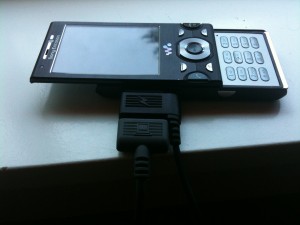 The phone also did not come with any memory installed. Worse, it uses a proprietary Sony-only memory format. Not having any Sony Ericsson phones around, this means either suffering without a memory card or spending money on a 8GB Memory Stick Micro so I can review a phone I will be sending back in less than two weeks.

One other thing about the phone I received–it was a prototype unit. Why am I getting prototype units when the phone is supposedly shipping? Am I looking at production software? How much does the build quality differ from this prototype with the real production?

So we haven’t gotten into actually using the device yet, and there are already three strikes against the device–strikes Sony PR could have easily corrected by ensuring I got a production model, the phone was charged when I got it AND included some sort of memory card with the device. It really makes me appreciate the work that Andy Abramson’s team at Comunicano does with the Nokia blogger relations program, who truly sets the standard for how these kinds of programs should be run.

Meanwhile, I only tested a few specific areas of the phone: the camera, the media player, and the web browser. I go into some detail after the jump.

The phone UI is reasonably responsive. It has some prompts that suggest it is a Symbian-based phone (perhaps using UIQ as a frontend versus Nokia’s S60), but I can’t find any documentation that suggests what OS it uses. It doesn’t really matter, I suppose.

One thing I absolutely hated about the default UI was that EVERYTHING was in motion most of the time–including the idle screen. I don’t particularly like that. Seems like an unnecessary waste of battery.

The Sony part of Sony Ericsson actually makes proper standalone digital cameras. You figure they might know a few things about making a decent camera. And at 8.1 megapixels, you’d hope the pictures would be good.

The problem with an 8.1 megapixel camera on a mobile phone is that the reduced size of the mobile phone makes the focal length of the camera fairly small. This means that pictures are only going to come out good under ideal conditions.

I did take a few pictures with the phone that came out ok, but I don’t think the extra megapixels did a whole lot of good. The pictures came out fuzzy unless I was able to hold the phone absolutely still–which I had a problem doing most of the time.

The camera does have some shooting modes that are interesting: panorama mode (which I didn’t test) and the “BestPic” mode. What it does is takes several snapshots of the subject in rapid succession and allows you to select which photo you wish to keep. Great for subjects who blink whenever the camera flashes.

Again, Sony should theoretically know some things about making a music player since they invented the concept of the portable music player with the Walkman, at least in my youth. Rarely do you see a Sony music player these days–Apple‘s iPod is pretty much the winner there.

I found the music player a bit nicer than I typically find on a Nokia handset. Having external media keys helped, of course. The built-in speakers were surprisingly loud. I could not see how well it handled large play lists as I did not have an external memory card, so I could only give it a cursory play.

I was able to treat the phone like a USB device and copy stuff onto the phone. Since there was no Mac software included, I didn’t bother to go much deeper into some of the other music player features.

I tried the built-in web browser to browse a few sites and get a sense for how well things like text entry worked. I did this over WiFi, which worked pretty good. The browser appeared to render pages at least as well as the Nokia devices I’ve used. It does the job adequately.

Consequently, I also saw how data input worked on this phone. When you push one of the number keys, the different choices for that key pop up. Subsequent keypresses will move the cursor along those choices. If you hold down a number key, the number will automatically be selected. It was helpful in showing exactly what key I pressed, as the phone keypad made it too easy for me to press adjacent keys.

One infuriating thing with text entry was that the pound key was used to generate a space, whereas the 0 key normally does that on a Nokia. This meant a lot of mistyping on my part. I wish all phone manufacturers would just agree on a standard text entry method and stick to it.

At least based on the few days I had the device, I have a difficult time recommending this device. While I’m sure some of this comes from the fact that Sony PR clearly dropped the ball in how they send these devices around to bloggers and whatnot, the device just doesn’t feel right to me. The keypad makes it far too easy to push adjacent buttons with my fat fingers. The proprietary memory cards are a non-starter. The lack of Mac support is also a non-starter for me, at least.