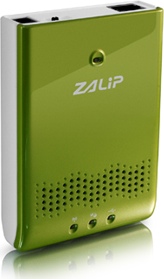 It’s rare that I obtain a consumer grade router that I am generally happy with “out of the box.” The only reason I ever buy a Linksys router is so I can lobotomize it and run DD-WRT on it. Otherwise, I find myself pulling out my hair due to instability issues and lack of functionality. This goes even double for travel-routers.

While this 3G travel router from Aluratek (sent to me for review) does not have everything I’d want to see in a router–I’ll get into the shortcomings later–it has enough features and is stable enough that I’m recommending it. It’s a cross between your typical travel router and a MiFi–actually more like a Cradlepoint device. You have to provide the 3G or 4G dongle. The good news is you can use it with any provider you can get a USB dongle for, assuming the modem is on the compatibility list. A large list of modems is supported, so it’s pretty likely yours is.

Like the MiFi, it’s battery powered. Unlike the MiFi and similar routers, it charges with a wall wort. I asked the PR firm that sent me this router for review about charging over USB, this is not supported. It does allow you to use the device plugged in, though, which is handy.

The router comes with a setup disk for Windows, which being a Mac user I ignored. Of course, the router works with a Mac just fine (it speaks IP, after all), there were no instructions provided in the box for how to configure the router for a Mac. I was able to figure it out pretty easily, being someone quite familiar with networking.

As I stated before, the router supports 3G/4G dongles from the major vendors. Unfortunately, unless you know the dial string and username/password from your 3G/4G provider, you will have a difficult time getting this working. Having done this numerous times on AT&T for various devices, I remembered the magic incantations needed (namely the APN to use, dial string, account and password). It would be nice if they provided the information for the most common providers or, better yet, let you choose from a menu in the firmware of known provider configurations.

The router itself can be used for making your 3G/4G dongle accessible from multiple computers (of course), but the device also has a LAN port. This LAN port can either be used to provide a wired host access to your 3G OR you can use it as a WAN port, allowing you to make a wired hotel connection wireless.

The router also has a removable battery, which means it can be used like a MiFi. The battery gets roughly 4 hours of battery life. I did not test that claim, but I did keep it in my bag for several weeks and didn’t bother to charge it. I used it periodically and did not run out of power during that time.

To field test this router, I took an AT&T 3G card I had, took out my SIM card from my iPhone and put it in. I used it in a few unusual places to test how well the device works. This includes: a Starbucks, a Virgin Mobile airplane (on the ground of course), a hotel room in the middle of Silicon Valley, and of course here at home. All of these places had their own WiFi that was suboptimal. (Starbucks usually has ok WiFi, but the day I tested this, it was particularly problematic)

I’m not sure if the router is to blame for this or not, but sometimes when I power on the router with the 3G dongle attached, it does not connect to the Internet properly. I find if I power cycle the router again and restart, the 3G connection comes up in roughly a minute. Once connected, I have relatively fast Internet through AT&T’s 3G network.

All in all, there’s a lot to like about this router. It provides an above-average set of functionality out-of-the-box. The documentation needs to be better for non-Windows users and they need to provide information on how to configure the router to work with different 3G networks. If you can get past those hurdles, it’s a good deal at ~$80 on amazon.com.