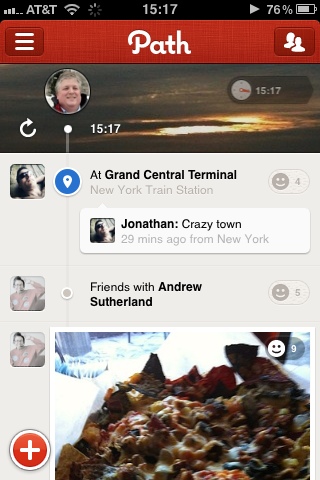 Every once in a while, a new app comes along that provides a fresh approach to something. For me, Path is doing this for Social Networking. Instead of encouraging to share with as many as possible, it’s encouraging me to share more to fewer people.

According to Path’s website, path is a smart journal that helps you share life with the ones you love. It actually began its life about a year ago as a photo sharing service similar to Instagram with one major limitation: you can only share with a limited number of people. This started out as 50 but was increased to 150. Compare 150 friends with Facebook’s limit of 5000 or Twitter’s unlimited.

From a feature standpoint, there is nothing new in Path. It’s an Android and iPhone app where you can share your thoughts, photos, where you’re at, who you’re with, and what you’re listening to. Rather than being called a status update, though, it’s called a moment. Aside from sharing to your friends in Path, you can also share individual moments with your Twitter or Facebook friends and check-in on Foursquare. You can also be completely private, if you prefer, and show a moment to absolutely no one.

One unique feature I haven’t seen on any app so far is the ability to do an “awake/sleep” post. It automatically posts an “awake” or “sleep” message with time, location (specific to neighborood.city), temperature, and if you’re waking up, how long you slept. It’s a nice touch.

Finding friends is pretty simple. You can use your address book, your Facebook contacts, friends of friends, or just a regular search box. Select whom you want to share your path with. If they confirm you as a friend, you will be able to access each other’s path and your activities will appear in each other’s timeline.

The timeline view is well done. Scrolling is quick and easy. You can see how many people saw a particular moment (and who). You can react to a moment with one of five emoticons: happy, laugh, surprise, sad, or love. You can post a comment of your own. You can see when people become friends with one another.

The iPhone and Android applications are nearly identical, though the Android version is missing a couple features: the ability to share on posts on Twitter and utilize Instragram-like photo filters. Edit: Version 2.0.2 of Path on Android adds support for sharing posts on Twitter.

As I said, none of this is new. Many social media applications do all of these things. Arguably, these things can be done better on existing, well-established platforms.

This isn’t about features, though. It’s about the experience. The experience reminds me of something I used long ago on my Nokia S60 phones–Jaiku. Jaiku had at least some of these features and was tied to a Nokia S60 handset. As far as a social networks go, it had a very intimate feel.

Path definitely has that same intimate feel. By keeping the service phone-only and not providing the ability to share other things like web pages, or allowing you to import content from other services, you really only see moments that people make a conscious effort to share on the service. This keeps the noise relatively low. The upper limit on the number of friend forces you to be a little more choosy about whom you want to be friends with.

I really like Path. It’s clearly not for everyone as you have to have an iPhone or Android device to even use the service. That said, it provides me a new, fun way to share my life with others and be a part of other people’s lives. I wish there was an iPad version of the app, but that’s my only serious complaint. You can download it from the respective App Stores for Android and iOS: