Living Mobile and the Post-PC Era

I’m just going to come right out and say it: most of my personal computing is done on a mobile device. A mobile device being a tablet or a phone either with WiFi or some kind of mobile Internet connection. This is despite being surrounded by more conventional laptop and desktop computers. Note this does not count my work-related use of computers, which, unfortunately, is still tied to a more conventional laptop.

It’s hard to know when the tipping point happened for me. Likely when I started getting more capable smartphones from Nokia, whom employed me at the time. Surely I had experienced the various Communicator-style devices (I had a 9210, a 9300, and a 9500). However, the two most pivotal devices for me: The Nokia E70 and the Nokia N95, which is the middle of 2006. I still have (and occasionally even use) the Nokia N95, even though by today’s standards, it’s only marginally more functional than a featurephone.

Of course in those days, Smartphones were not entirely accesible to the masses. Sure, they were obtainable in the sense you could go to any operator and buy one. But then what? Most people had no clue how to use them. Why else do you think the US operators had no problem selling unlimited data packages? Because no one was really using them (except for a few of us).

Then something changed: the iPhone came on the scene. While the first iteration of the iPhone OS (now called iOS)  was arguably less functional than smartphones of the day, it quickly became the smartphone that everyone in the developed world wanted. It raised the bar for what the user experience should be on a phone.

Then Google-backed Android came on the scene and, after a few iterations, became a credible alternative to the iPhone. Microsoft, being a bit late to the party, completely redoes their mobile operating system. Nokia’s Symbian, the long-time leader in the smarphone space, could not keep up with the level of innovation Google and Apple were cranking out and, eventually, Nokia announced their plans to sunset the operating system and go with Windows Mobile. RIM, maker of the Blackberry handsets, have also struggled to keep pace and have stagnated.

It’s pretty clear to most industry observers (and even lay-people) that Android and iOS are the dominant phone operating systems. But it’s more than that: it’s now mobile computing. The same popular smartphone operating systems are now available in a different form factor device: tablets. And, as a number of industry analysts are saying, tablets are the new personal computers.

Apple led the way again here by introducing the iPad, using the same OS used on the insanely popular iPhone. A number of other hardware manufacturers have tried (and failed) to duplicate the success that Apple has had with the iPad using Android. The only manufacturer having any success is Amazon, who introduced the Kindle Fire at the end of 2011. Even their numbers are anemic compared to what Apple sells, but they have something the other tablet makers don’t have: a thriving ecosystem on which to use the device. Remember, Amazon sells all kinds of digital goods in much the same way Apple sells them through iTunes and the App Store.

Why do people prefer to use mobile devices rather than traditional computers? For me, it’s always been: because the device is always with me and connects me to what matters most. Even if it’s not a full experience, it’s often good enough.

For other people, it’s that these mobile devices are easier to use than traditional PCs. This is partially due to the easier-to-use touch interfaces on the current generation smartphones and tablets. There is also less for the average person to “screw up” as well, making for a less intimidating experience. 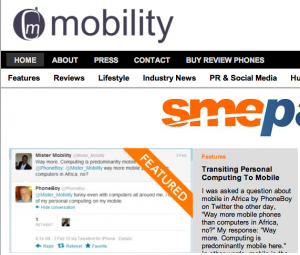 For another class of people, it’s because they can’t afford the PC and everything it takes to make it operate. This is certainly true in less affluent nations, such as Nigeria.

I had an interesting conversation over Twitter with Yomi Adegboye AKA Mister Mobility (he’s well worth following at @Mister_Mobility). It confirmed this hypothesis. Of course, during the 10 years I worked at Nokia, I took every opportunity to read up on everything Nokia was doing, including how they were developing phones for places like India and Africa. My hypothesis was already well informed.

In these less affluent nations, many people don’t even have electricity. Or if they do, it is supplied by a generator of some sort. Wired phone service may or may not exist (if it does, it is surely expensive for voice service, much less data service). The infrastructure needed to operate a PC may be entirely out of reach.

Meanwhile, while even a basic mobile phone is out of reach for some, that, a SIM card, and an occasional source of power is all one needs to compute and stay connected. For these folks, their mobile phone is their only computing device. Not because they prefer it, but because that’s what they are able to obtain.

There is always going to be a need for bigger screens and more horsepower than you can pack into a device that lives in your pocket. Especially by people who generate large amounts of content. Will that be the norm for the average person, however? No.