Not to make light of the disaster in NYC caused by Hurricane Sandy, but consider the following conflicting tweets (first and last one in this screenshot): 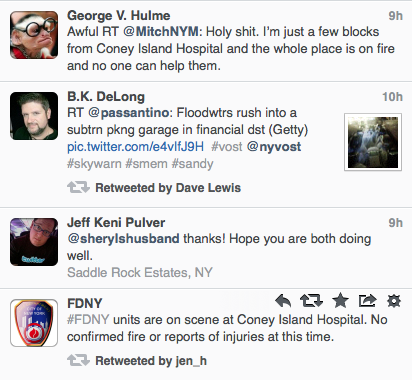 In one case, you have a “man on the street” report claiming that there’s a fire at Coney Island Hospital. In another, you have what appears to be FDNY claiming no fire. Which one is right?

On the Internet–and especially Twitter–no one knows who you are. Really. I could claim to be anyone, anything, anywhere. No one would be the wiser. Misinformation could easily be propagated by well-meaning people. Clearly they wouldn’t have propagated it if they didn’t believe it to be true, right? Suddenly, misinformation becomes fact.

Social Media is by far not the only place this happens. I love how Curry and Dvorak mock “on the scene” reports of various sorts on No Agenda (in the morning!). They’re just a couple of guys dicking around and they can–on the fly–make authentic-sounding reports from, say, the scene of Hurricane Sandy, or a war-torn battlefield in Afghanistan. Imagine what trained professionals with more money, time, and an agenda can do!

Everywhere–especially in Social Media–there is a lot of noise. A lot of it. It’s up to you to find the signal–the real message–amongst the noise. No one is going to do it for you.