I’ve been having some issues with my WordPress-hosted sites on Dreamhost. I whined about it on Twitter late in the evening. Within minutes, I had an email from someone at Dreamhost who explained what was going on, namely my site processes were taking up too much RAM and processes were being killed on the shared webhost. They also provided a lot of useful information that I could use to debug the problem.

Now I am not faulting Dreamhost. In fact, during the four years or so I’ve been a Dreamhost customer, I’ve had an overall excellent experience. Not to say they don’t have issues–all webhosts do–but they’ve always been fairly responsive the handful of times I’ve contacted them and they do a good job keep customers informed about what’s going on.

So really, this is an indictment of WordPress itself, which is of course what I run on my Dreamhost web hosting account for the most part.

One of the tips my friendly neighborhood Dreamhost employee pointed me at was a plugin called P3-Profiler. It’s basically a plugin that tells you how your various plugins contribute to the overall load time. So I installed it and ran a test. Here are the results: 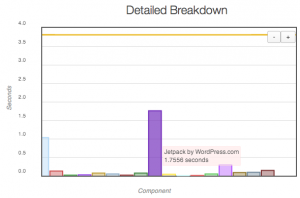 There are two long poles in the tent: The Blubrry plugin (which I use to serve up my podcast) and Jetpack, a plugin that WordPress itself provides.

There was a third plugin on here that I was using to provide mobile theme support, which was roughly similar to the runtime Blubrry was taking up. Once I realized that Jetpack did it (as it does a number of other functions), I removed that plugin and enabled support for the feature in Jetpack.

So is this WordPress or the plugins? Hard to say. The more stuff a website has to do, the more resources its going to take to operate said website. And, really, WordPress could do a better job of making their own plugin more efficient.

There’s something to be said for those old static pages I used to do back in the 1990s. They are dirt simple to serve up